BCAAs in supplement form, however, are free-form, require no digestion, and are rapidly absorbed into the bloodstream. They spike blood amino acid levels to a much greater and faster extent than peptide-bound aminos. Even a few grams of free-form BCAAs will spike BCAA plasma levels to a much greater extent than 30 grams of whey protein, thereby having a more immediate impact on protein synthesis and protein degradation.

Forget other supplements that are long on promises but short on results. Instead, check out the power of BCAAs. 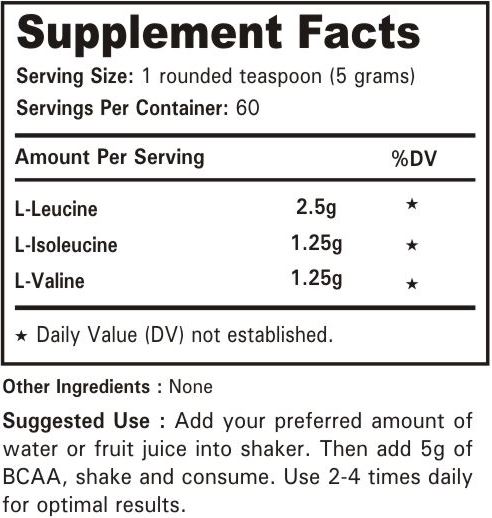 Ashraf khan
Sunday, 12 May 2019 Genuine review which is good
Taste of black current is good and about result I will reply to it soon

Jojo Bhati
Sunday, 24 February 2019 Awesome
My body gets dehydrated easily...and now days m using this bcaa and it works wonderfull and recover very fast! And the taste the black current specialy is awesome! Thanks to u!

Arsh
Thursday, 22 February 2018 Awesom
The change in performance in gym can bs immediately feeled it tastes like medicine but result are superb