Creatine HCL have a much greater solubility, which is why a much lower dose is required

Why Creatine HCL is better than any other Creatine products

Within the human body, we produce around 1g of creatine per day which is synthesised mainly within the liver and kidneys (Persky et al. 2001). The majority of creatine stores are found within muscle and humans can obtain additional creatine externally via diet (foods such as meat & fish) and supplementation.


There are two key considerations when supplementing with creatine and deciding on which form to use:

1) Aqueous Solubility: This describes how well creatine mixes and is absorbed. Below is a list of the common creatine forms and their relative solubility score (the higher the score, the greater the solubility). As you will see, some forms of creatine such as Creatine HCL have a much greater solubility, which is why a much lower dose is required.

2) Cell Permeability: In this context cell permeability describes how well creatine crosses the intestinal barrier. Some forms of creatine have a poor permeability, meaning most of that which is ingested is not actually absorbed, thus resulting in it being excreted in the urine. Creatine HCL has one of the highest absorption rates out of all the creatine forms currently available on the market.
It is also important to note the key relationship between creatine and water. Certain sources of creatine require a large amount of water, which is one of the reasons why certain individuals experience digestive issues and extracellular water retention (outside the cell) when taking it.

Suggested Use:
As a dietary supplement, take 1 serving, 30-60 mins prior to training with approximately 4-6 oz, of water. Creatine HCL can be taken empty stomach, with food, or mixed with your favorite Nutrition Planet's supplements. 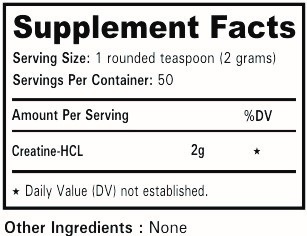 AADHAR MUTREJA SO RAVI MUTREJA
Friday, 15 May 2020 Best creatine you can ever get in this price
The only indian brand to give quality creatine hcl at such a reasonable price.

Pankaj gangwar
Friday, 20 March 2020 Awesome hcl creatine
Good mixebility and taste. Results are soon . Thanks for give me my delivery on time.